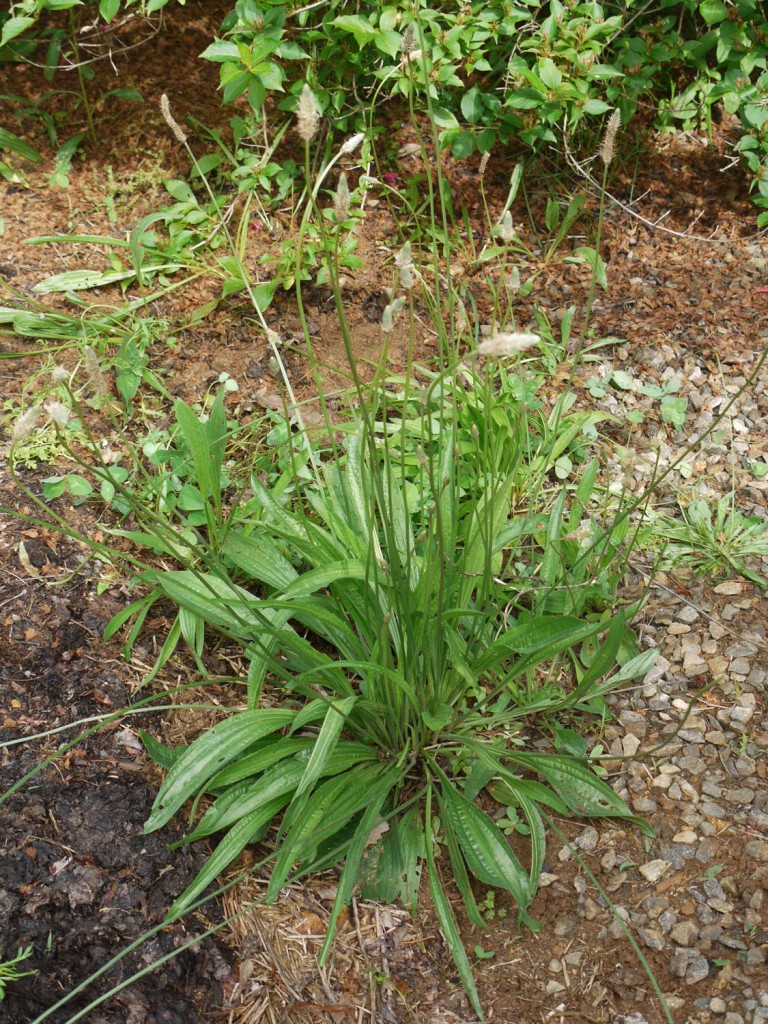 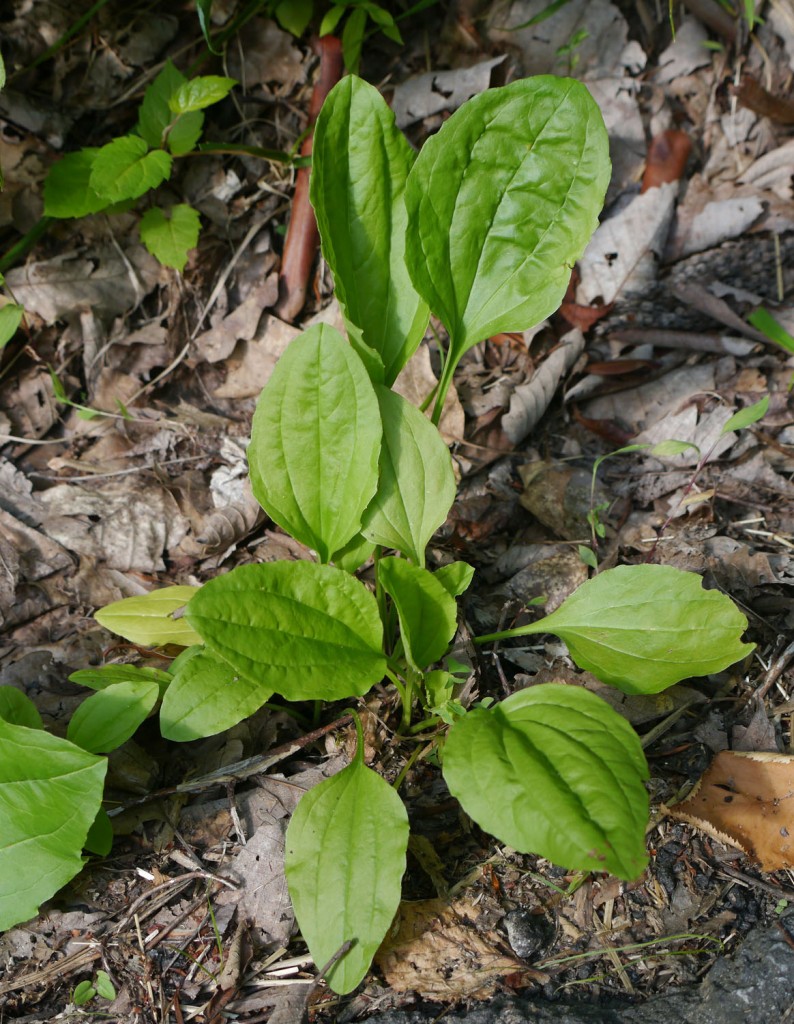 The following image compares the leaves of these two plantains.  On the left you can see the lance-shaped leaves of Plantago lanceolata while a leaf of P. major is on the right.

Both plants have leaves with parallel veins — an identifying characteristic.

Let’s look at another specimen of Common plantain.  Notice the flower spikes arising from the basal rosette. 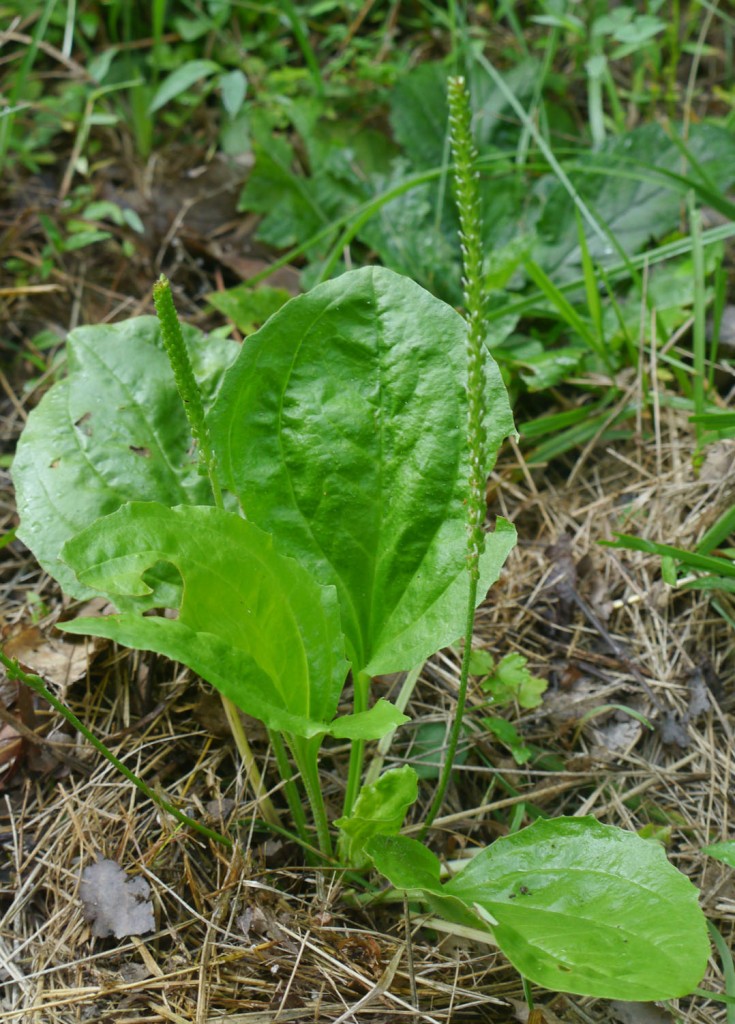 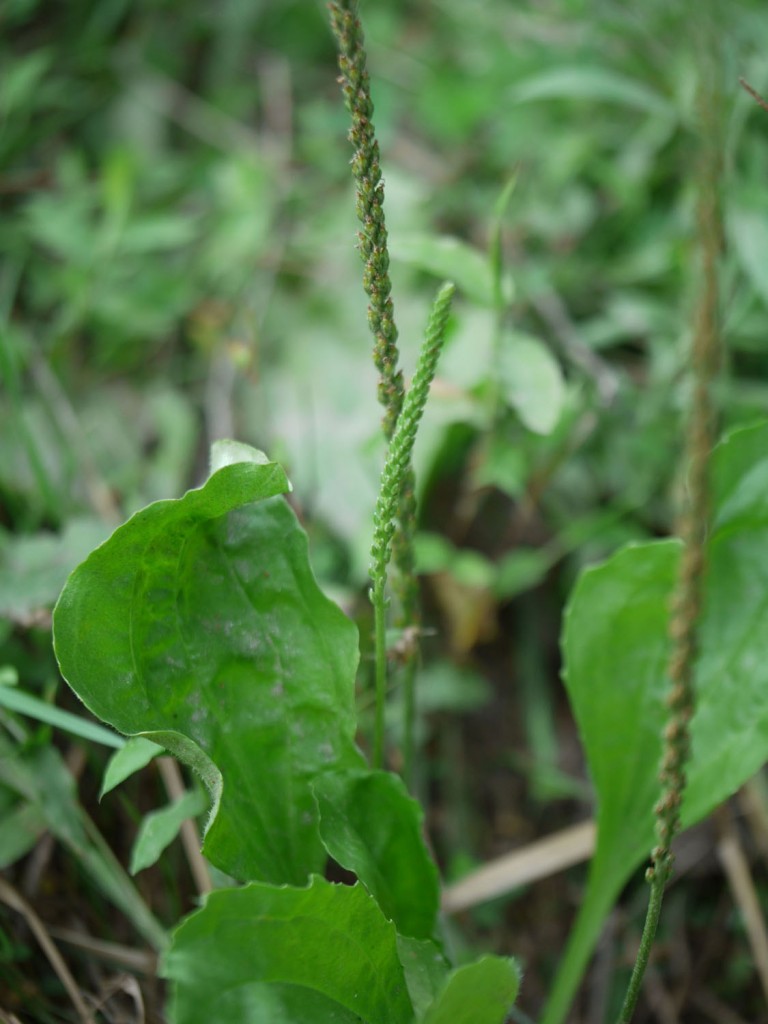 And now for a close look at the flowers on a single spike . . .  The flowers mature from the bottom to the top.  So the lower portion looks brown (from the anthers), while the middle portion shows bits of white, and the top portion of the spike has still developing flowers.

Turning back to English plantain (Plantago lanceolata), its flower spikes also arise from the basal rosette.

The flowers on the English plantain inflorescence also mature from the bottom to the top.

And here’s a very close view of those flowers which are so familiar to many of us . . .

But wait.  Here’s another type of inflorescence growing from an English plantain. . .

These flowers also mature from the bottom to the top.  Yet they do not have those little creamy white flags flying out from the inflorescence.  Let’s get the “very close” view of these flowers.

So what’s going on here?  It looks like the first type of English plantain inflorescence consists of staminate flowers.  The little white “flags” are the anthers (at the end of the stamens) which carry the pollen.  The last two sets of images show a pistillate inflorescence  — with a single white pistil extending as a fine thread from each flower.

According to John Andrew Eastman in The Book of Field and Roadside: Open-Country Weeds, Trees and Wildflowers:  “Flowers may be pistillate (all female), staminate (all male), or bisexual — but all flowers are the same on an individual plant.”  Aahh, this confirms the observations and related conclusions!

NOTE (January 15, 2015):  Also, check out the video portrait of English plantain with a detailed description of the plant’s yearly growth cycle.

8 Responses to Observations of two plantains