Notice the shape of the leaves — as well as the petioles.  As Common chickweed matures, the leaves at the end of the stalk do not have petioles.  The leaf also gets a bit more interesting in its overall shape.  The leaf margin remains entire.

This younger plant’s stalk demonstrates the hairs growing in a line along the stem and up the petioles.  You can also see the leaves are opposite with pinnate venation.

If you study the above image carefully, you will notice the line of hairs changes position along the stalk at each node.  It’s like the hairs spiral up the length of the stalk.  In the next photo, you can see another identifying characteristic of Common chickweed — the inner core which reveals itself when you pull on the stalk.  This is easiest to demonstrate with a young plant vs. a mature plant.

As the Common chickweed plant grows, it develops many stalks from the same base root system.  It thickly covers an area.

It begins to grow its flower buds at the end of each stalk.  The buds are covered with fine hairs. 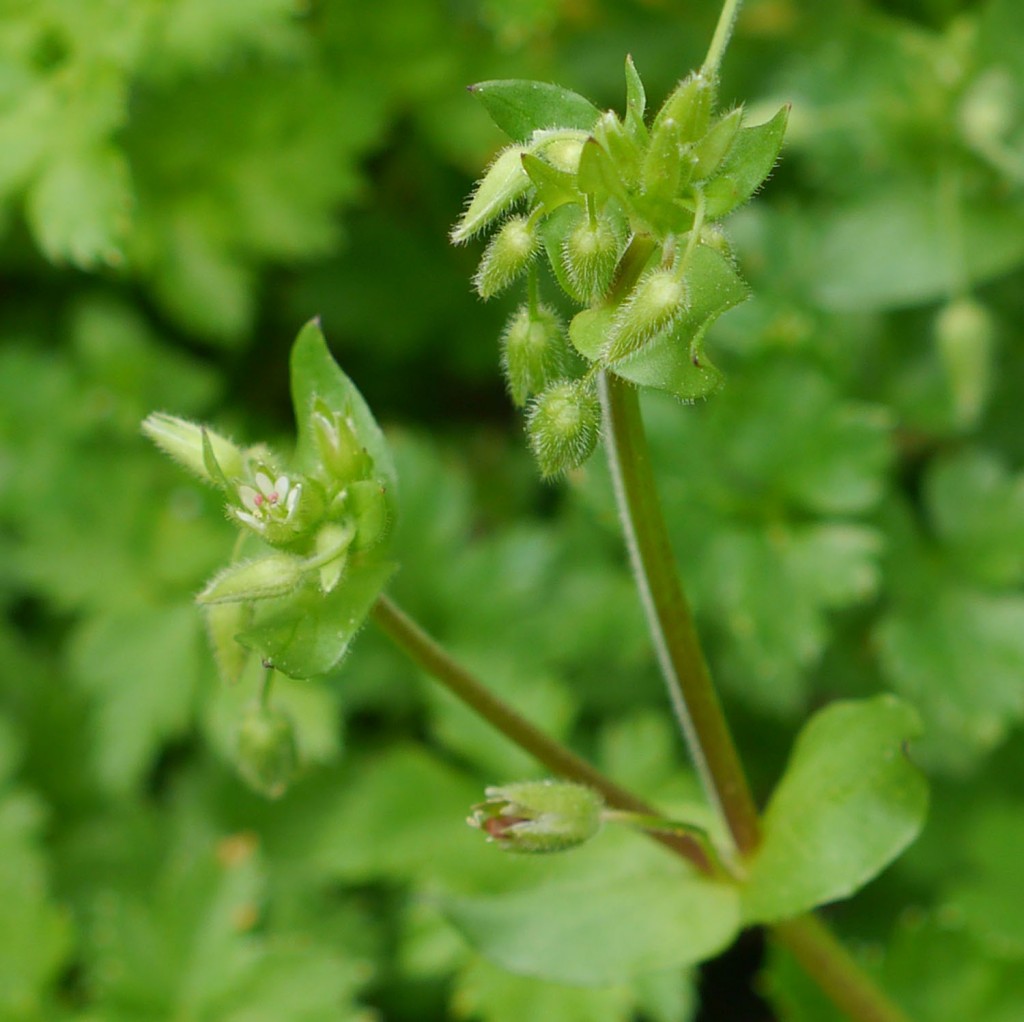 . . . and we can see the sepals are as long as — and even a tiny bit longer than — the petals of Common chickweed’s flower.

Let’s take a very close look at an open flower of Common chickweed:

Notice the yellow pollen grains on most of the anthers, the single pistil with its intricately topped style, and the hairy sepals supporting each petal.

Turning to Star chickweed, a woodland wildflower which blooms in early spring, we can see the overall plant does not get as full as Common chickweed. 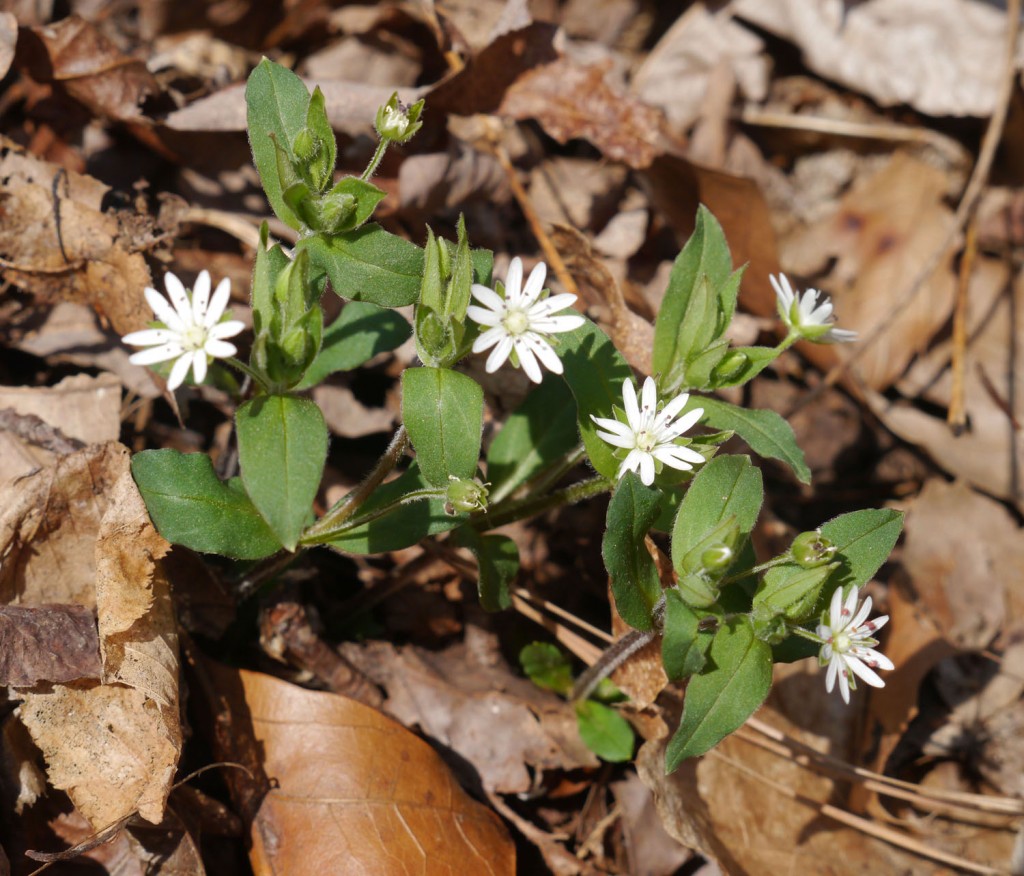 Star chickweed’s scientific name is Stellaria pubera.  “Stellaria” for the star-shaped flower.  And “pubera” for the hairiness of the entire plant.  Notice the fine hairs covering the leaves, circumference of the stalk, and the flower buds.

If you pull on Star chickweed’s stalk, the outer covering is much stiffer than with Common chickweed.  Yet, it is possible to reveal the inner core of the stalk. 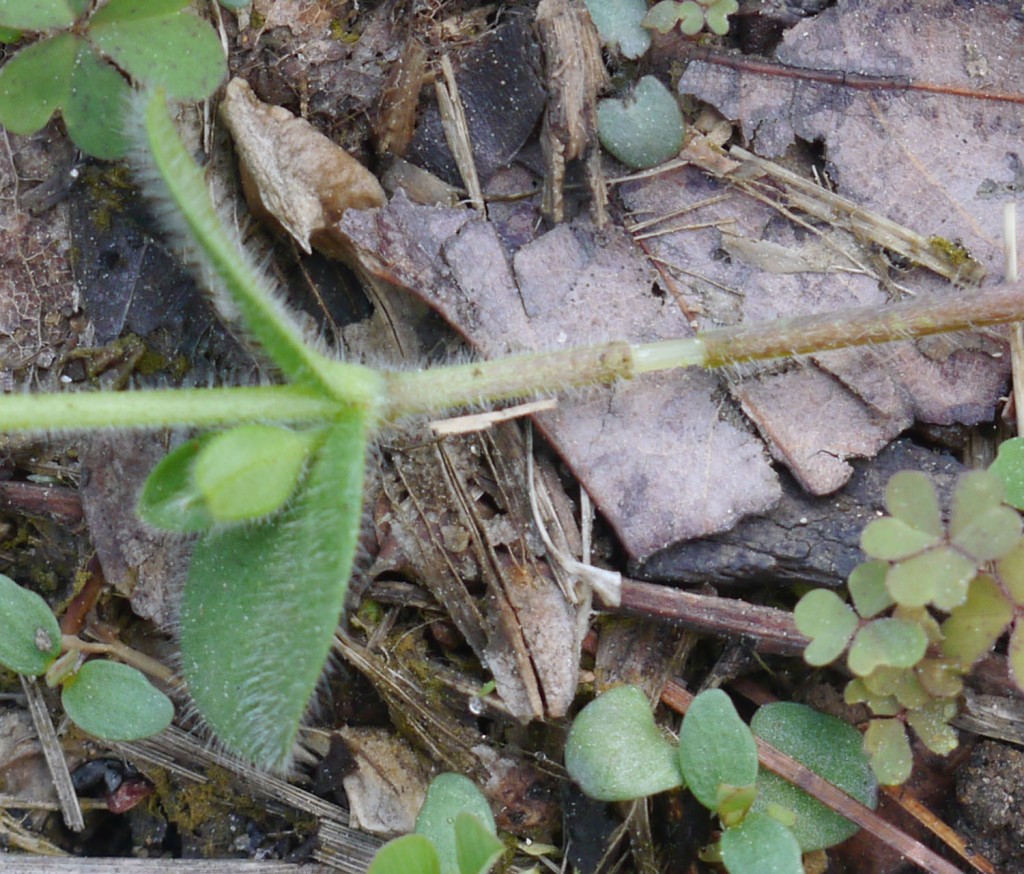 Here’s a Star chickweed flower just beginning to open.  You can see the anthers (dark spots) peeking out and rising above the white petals. 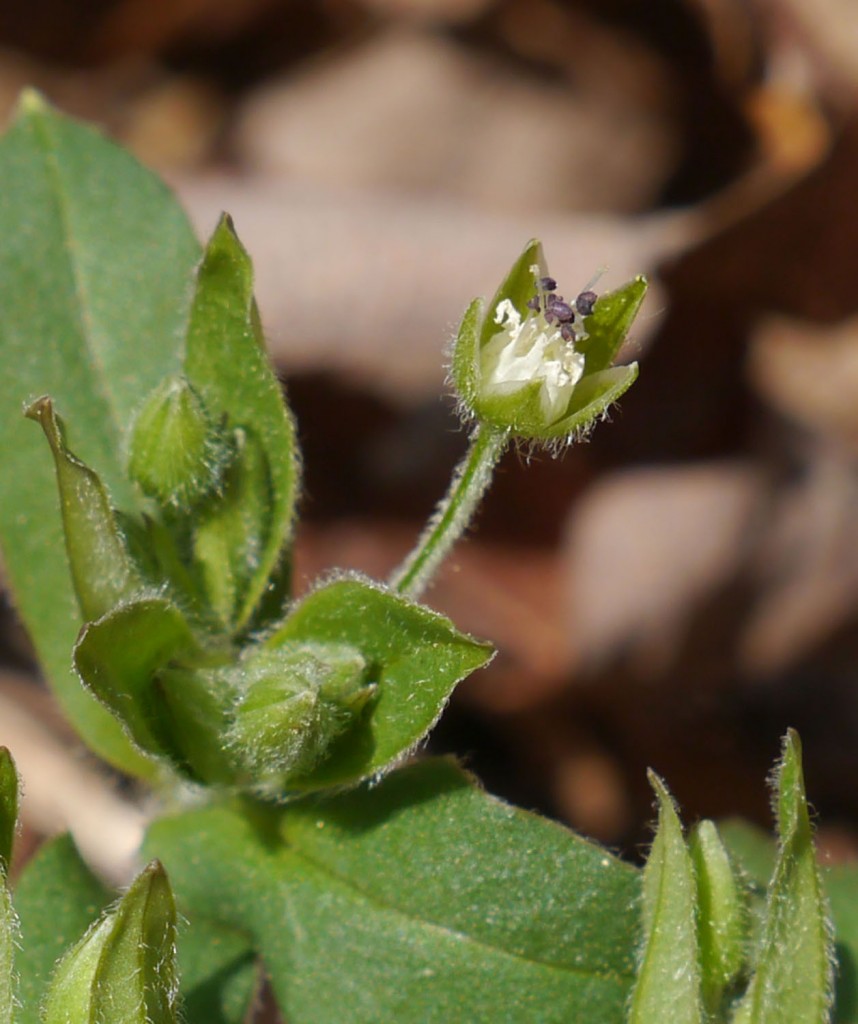 This next image demonstrates the sequential blooming process for Star chickweed.  This shows developing flower buds in two stages, a flower beginning to open, and a fully opened flower. 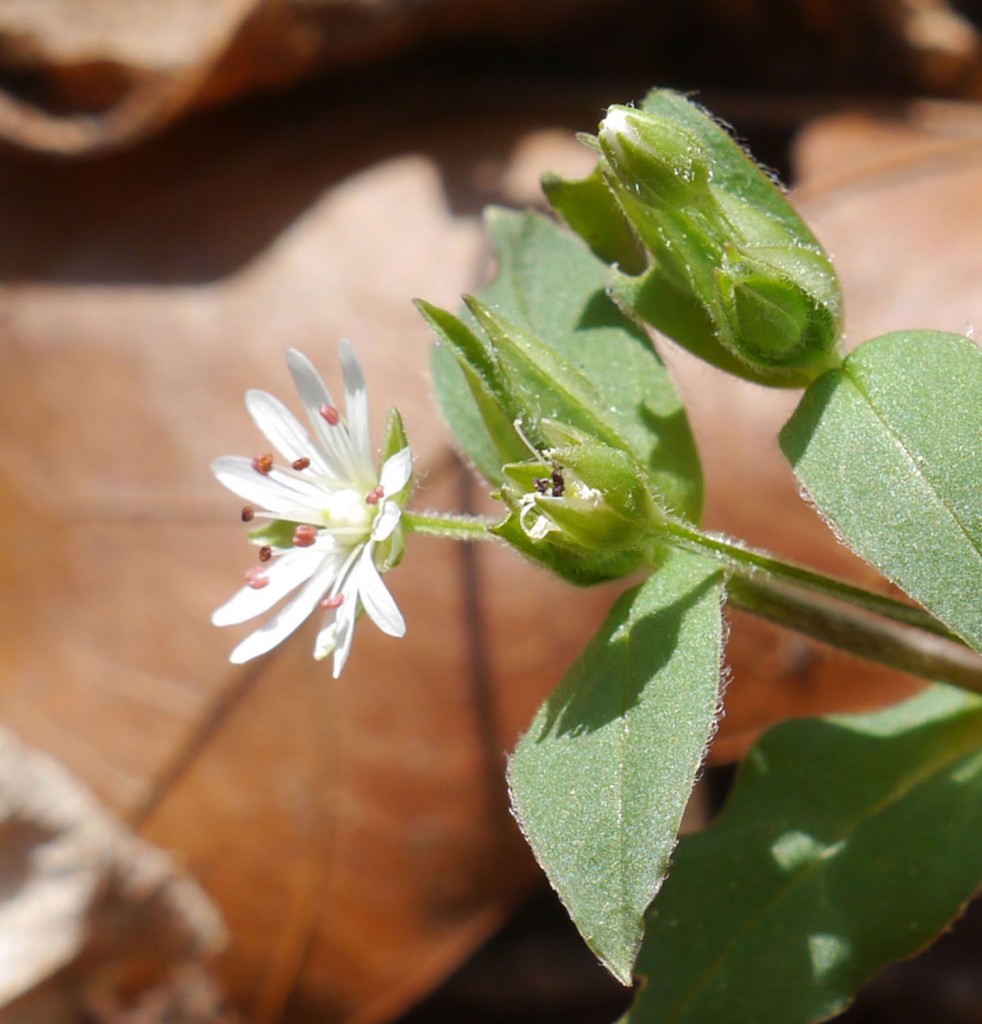 Study the flower carefully.  It has five deeply cleft petals (not ten), stamens, and a single ovary with three fine white styles arising from the center. 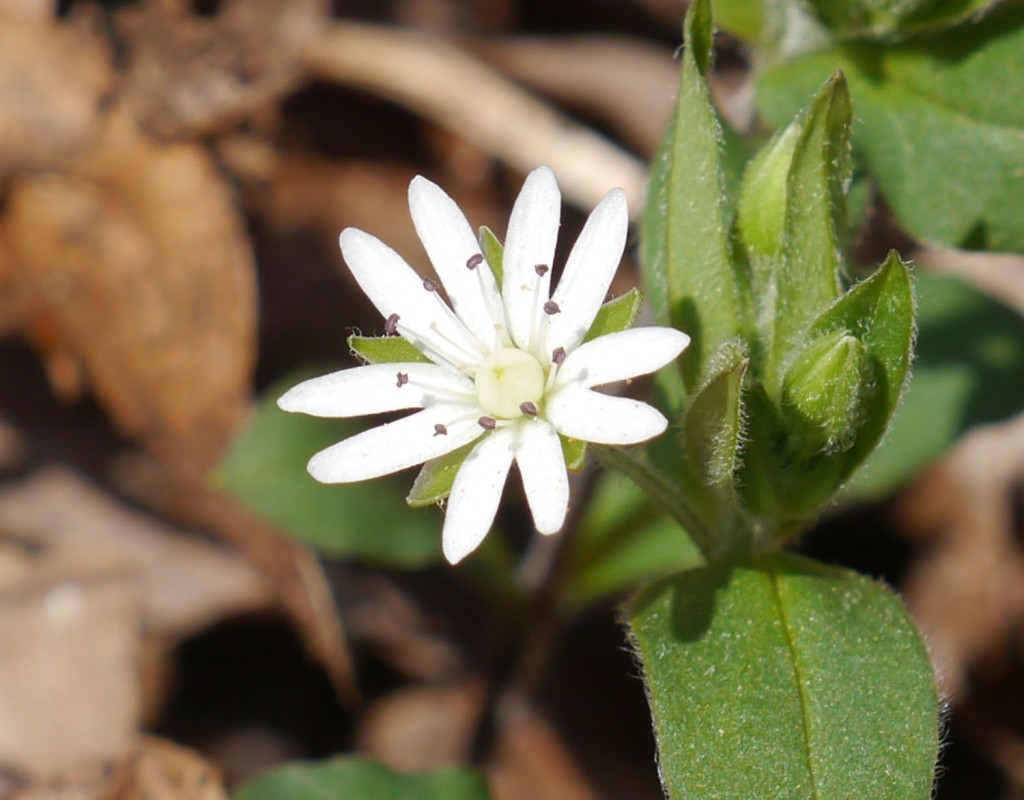 You can see those three white styles in the above image, the next image, and most clearly in the third Star chickweed image above. 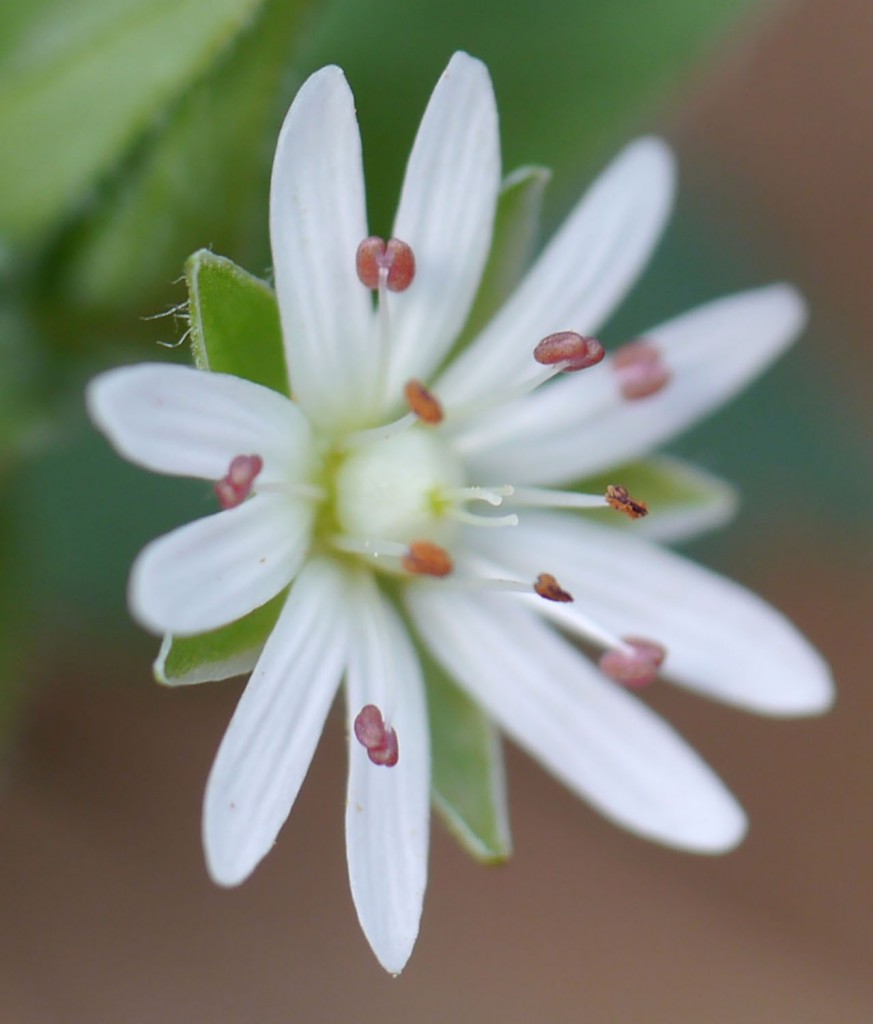 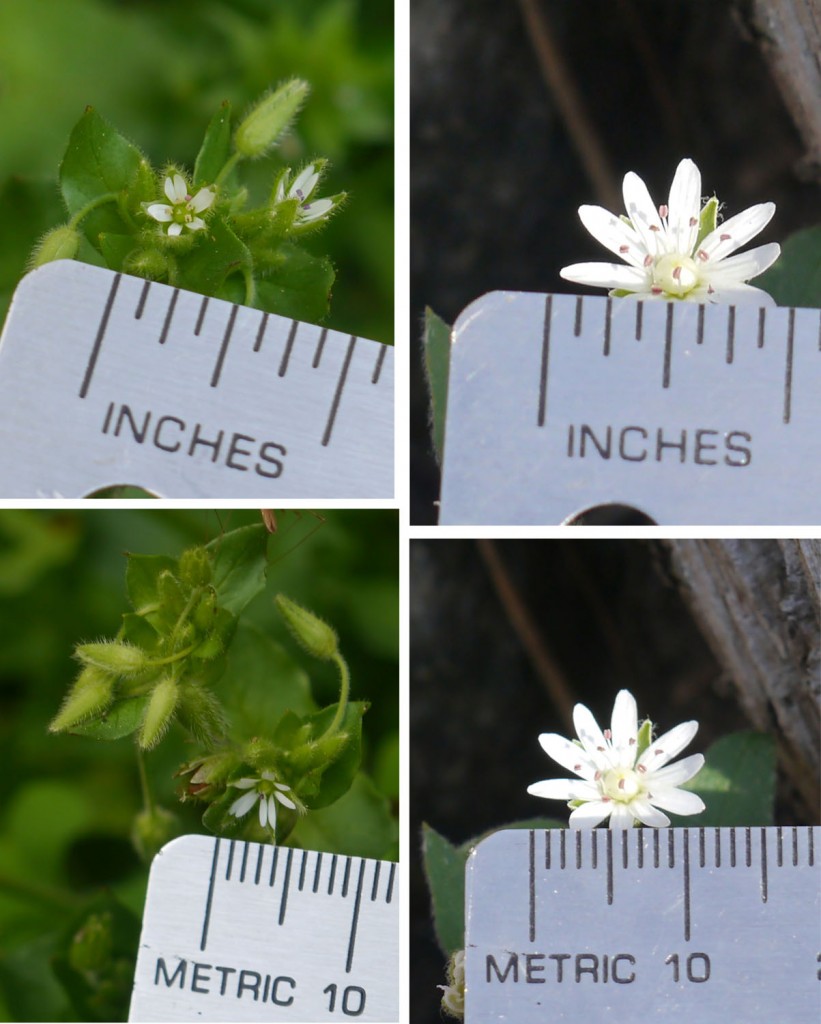